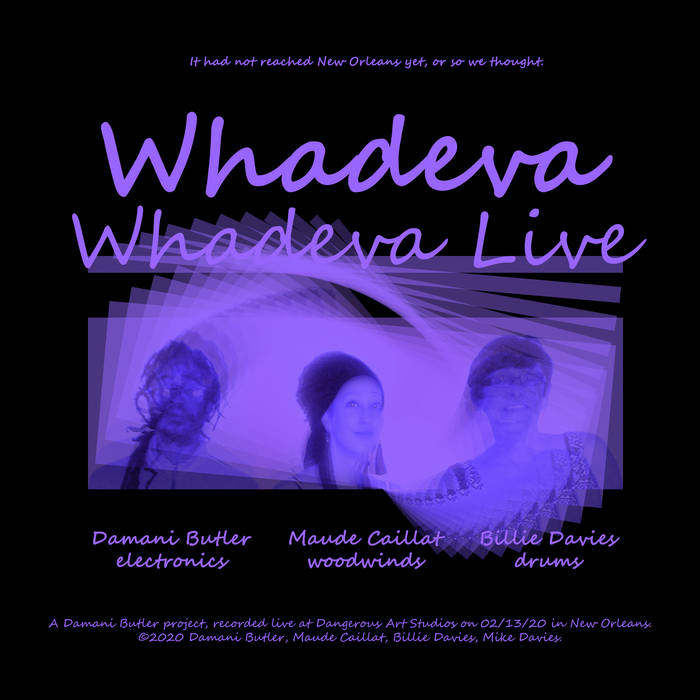 It had not reached New Orleans yet, or so they thought.

They had been prepping these recordings since late December, early January. Damani Butler contacted Billie Davies and Maude Caillat asking them whether they would be interested in doing a project with him. He also mentioned he had contacted female artists for this project. Both Billie Davies, an american drummer from California, and Maude Caillat, a sax player from Switzerland, were currently working and residing in New Orleans. Damani had rented a house in the Lower Ninth Ward, which became Dangerous Art Studios, and was busy transforming it into the whole house and whatever sounds in it, showed in it and whomever entered it, being part of a work of art he was creating.
The project would be experimental, completely improvisational audio art. Intuitive, instinctive in nature Damani would be doing his electronic loops, beats and waves while Caillat and Davies played whatever they played.
Billie decided to use her electronic drumset and Maude would bring her sax and flute to the project. Mike Davies would be recording the project, and be responsible for mixing and mastering the music that was recorded live on 02/13/2020 for a later unedited release of what was played that evening.
This was definitely so very much a Billie Davies project, always wanting to create, no preconceived ideas for the music, no notes written, no words written, no concept conceived but what you’re surrounded by, play what you feel at this moment, express your feelings as the now keeps moving forward in the now, whatever happens, a direct connection from the brain to the sound, whatever comes up, whatever makes you move in whatever direction.
Damani Butler was in his room, surrounded by a hundred pieces of all kinds of audio equipment, from keyboards to synthesizers, to percussion, to whatever.
Maude Caillat was in her room, with her woodwinds and a microphone to record it surrounded by several pieces of Damani’s electronic art.
Billie Davies was in her room, her electronic drums that can produce what she calls whatever a drum or percussion sound with sometimes even an organ or bass or guitar sound, and a light show for the mood.
All the rooms throughout the house had serious wattage stereo speakers so everyone would hear what everyone else played and wherever the people that attended the recording were they could hear all of it come through speakers.
Several people showed up, gathering in the kitchen where there was wine, beer, whiskey and coffee and whatever they brought.
All the music for "Whadeva" was recorded during the Coronavirus outbreak with a final recording date of February 13. It had not reached New Orleans yet, or so they thought, with mardi-gras slowly but surely going into full swing. All we knew was what we heard and read and saw, which then made me think... and we all got sick with some type of flu. A month later we were all on lockdown and now it is time to let go, to let this music go.

The project will be having different iterations, the first iteration, this current release of 6 parts being the album “ Whadeva ” and 1 single release called “ The Ninja ” has been produced by Mike Davies and Billie Davies.